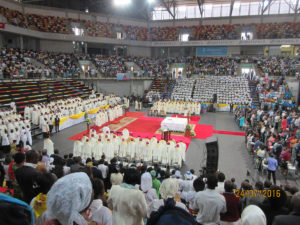 The 17th Plenary Assembly of the SCEAM (Symposium of the Episcopal Conferences of Africa and Madagascar) took place in Luanda (ANGOLA) between July 19th and July 24th 2016, under the chairmanship of Cardinal Gabriel MBLINGI, archbishop of Lubango (ANGOLA). The theme was that of the family: « Family in Africa, yesterday, today and tomorrow, in the light of the Gospel ».

The SCEAM was created in Africa in the 1960s. It gathers the Episcopal conferences of the continent and Madagascar. The IMS had to be there. Brother Henri VIGNAU (administrator of the Steering Committee) and Sister Eugénie DENA (Manager of the West Africa section) made the trip in order to present the missions of the IMS to the 150 cardinals, bishops and priests who were present. The speech was appreciated; it was followed by several discussions in small groups. Indeed, in many African countries, the need in terms of support to the health of the priests from the dioceses is still very strong.